The most profound of human experiences cannot be put neatly into words – they are so extraordinary as to completely defy encapsulation within our very limited language. A total eclipse of the sun is the epitome of such ineffable natural events. To paraphrase Annie Dillard, “Comparing a partial with a complete solar eclipse is like comparing kissing a man, to marrying him.”

Similar to the wave of up-reaching hands that passes around a large stadium for a sporting event, the spirits of those souls witnessing this rare and seemingly miraculous event all along the 70-mile diameter centerline of the moon’s shadow passing from Oregon to South Carolina joined together in astonishment as the peak of totality crossed the entire continental United States in just 90 minutes. 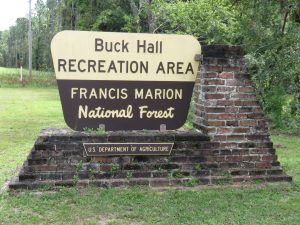 With distant surrounding thunderstorms providing an exciting and dramatic backdrop, we were among the blessed souls at the Buck Hall Recreation Area just north of Awendaw, South Carolina, to bid final adieu to the moon’s shadow after its spectacular 3,000 mile crossing from Depoe Bay, Oregon, across 13 states, until its departure over the alligator-infested salt marshes just north of Charleston. The last time the moon’s shadow traversed the continental United States was in 1918, at the close of The Great War (later renamed World War I).

For billions of years, the moon orbited much closer to earth, and eclipses were more frequent, with longer duration. In contrast, a few hundred million years from now, the moon will have receded from the earth (at 1.5 inches per year, or 23.7 miles per million years) to such a distance that it will never again be able to cover the sun’s surface from earth’s perspective. So we are living at the perfect time to view such incredible phenomena that reveal the vibrant dance of our sun’s atmosphere, normally hidden from view.

Although clouds interspersed with blue skies during most of the 90-minute buildup as the moon progressively obscured the face of the sun, we remained positive that we would see the total eclipse, along with our surrounding compatriots who had set up elaborate camera and telescope systems to observe this most unique of natural phenomena. Joined in purpose to witness this rare event, we were rewarded with clear sky for the 2 minutes and 30 seconds of totality. The brilliant multicolored (predominantly bluish-violet) solar corona danced in glorious splendor – the electrified streaming atmosphere of our home star extended out millions of miles, glowing at temperatures over a million degrees hotter than the 11,000 degree Fahrenheit visible surface of the sun.

Those moments spent during totality will forever be time completely suspended – so truly extraordinary as to represent a glorious oneness with this fantastically beautiful universe. Sublime perfection!

Jupiter glowed brilliantly to the left of the coronal apparition, whose shimmering undulations revealed an extraordinary level of reality – always there, yet forever obscured behind the intense light of the sun’s surface (a million times brighter than the corona). And, as the sun was completely blocked just after the “diamond ring” appearance of Bailey’s beads (sunlight streaming through the valleys between the mountains of the moon), the entire landscape of the South Carolina coastal marsh was lit only by the vibrant corona (as bright as the full moon). The horizon became suffused by the soft reddish-yellowish glow normally associated with a beautiful sunrise or sunset, but surrounded us completely.

To punctuate the delicate perfection of the event, lightning burst through thunderheads just inland from us, as if to remind us how fortunate we were in that suspended dimension beyond time and our consensus reality – indeed, a reminder that our small band of amazed human beings were united as one by this unique natural spectacle and the wonder of our shared experience. 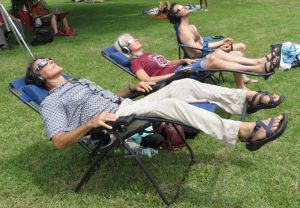 While observing the moon’s eclipse of the sun, we listened to the sounds of Eclipse, a special Sacred Acoustics recording that taps into the energies of the earth, sun and moon. The magical soundscape of Eclipse provided a perfect accompaniment to the visual event. It is a recording that acknowledges our connection to the mindful universe we inhabit and that we will listen to again whenever we want to harvest such creative energies.

The several hundred people gathered with us at Buck Hall were all transformed through sharing this magnificent event together. We could also feel the wave of millions of other souls along the 3,000-mile path across the country and with many more around the world who tapped into the spirit of the eclipse through television, internet and meditation.

Advances in quantum mechanics and studies of consciousness reveal we are all truly connected as one. Having experienced the eclipse with so many others, we bring that extraordinary oneness of existence into this world for all fellow sentient beings. We see this signal event as a sign of unity. Even when the world appears divided, it is events such as the eclipse that help us recognize the oneness we all share.

Such profound oneness is an integral message of our upcoming book, Living in a Mindful Universe: A Neurosurgeon’s Journey into the Heart of Consciousness. The timing of the eclipse thus seems a fitting portent to this unification we foresee and describe. Together, we can make the world a better place, where ALL lives matter. As consciousness continues to evolve, we are each an integral part of the whole.

Want to join the discussion?
Feel free to contribute!

This site uses Akismet to reduce spam. Learn how your comment data is processed.

Eben Alexander, MD, was an academic neurosurgeon for over 25 years, including 15 years at the Brigham & Women’s Hospital, Children’s Hospital, and Harvard Medical School in Boston, with a passionate interest in physics and cosmology. He is the author of the New York Times #1 bestseller Proof of Heaven and The Map of Heaven. His third book, co-authored with Karen Newell, Living in a Mindful Universe, was released in October 2017. Learn more…

LIVING IN A MINDFUL UNIVERSE

A Neurosurgeon’s Journey into the Heart of Consciousness

A Call For World Peace

Welcome to the Revolution in Consciousness
Scroll to top
Translate »