The Map of Heaven

How Science, Religion, and Ordinary People Are Proving the Afterlife

The author of the #1 New York Times bestseller Proof of Heaven teams up with the sages of times past, modern scientists, and with ordinary people who have had profound spiritual experiences to show the reality of heaven and our true identities as spiritual beings. The Map of Heaven takes the broad view to reveal how modern science is on the verge of the most profound revolution in recorded history – all around the phenomenon of consciousness itself!

When Proof of Heaven was published, some readers contacted Dr. Eben Alexander to argue that his near death experience was impossible. But many more have written to say his story resonated with them in profound ways. Because of what these people have told him, Dr. Alexander has come to realize that sharing his story has allowed people to believe what so many in ancient times knew: there is more to life, and to the universe, than this single earthly life.

Dr. Alexander met and heard from thousands of individuals whom his story has affected. He also studied what the world’s religious traditions, and its philosophers, have had to say about the soul’s survival of death, and he has been deeply surprised at how often those voices from the past synch up with what he heard from people today. In The Map of Heaven, he shares some of the stories that the people have told him and links them up with what the world’s spiritual traditions have to say about the journey of the soul.

Part metaphysical detective story, part manual for living, The Map of Heaven explores humankind’s spiritual history and the birth of modern science in the seventeenth century, showing how we forgot, and are now at last remembering, who we really are and what our true destiny really is. 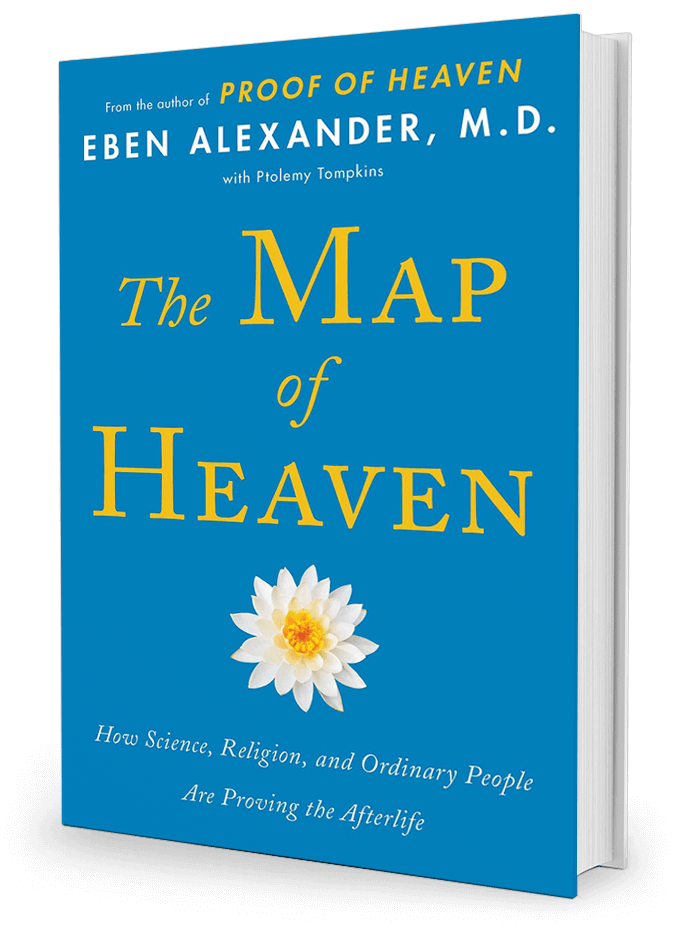 What People Are Saying

“Dr. Alexander does it again. He brings his unique and considerable scientific knowledge and illuminates the world of spirituality. He creates a geography of science and faith that shows us a larger world filled with hope and dignity.”

“Neurosurgeon Eben Alexander generated enormous interest in what happens when we die in Proof of Heaven, his many-splendored account of his near-death experience.  In The Map of Heaven he expands his account by relating similar experiences of others, and by a rich analysis of supporting views from scientists and philosophers.  The evidence Alexander offers suggests that the day is approaching when it will be considered irrational and unscientific not to believe in the survival of consciousness following physical death. This day cannot come too soon, for it will restore meaning and hope in a world besotted with the morbid fictions of materialism.  Thank you, Dr. Alexander.”

Larry Dossey, MD, Author of One Mind:  How Our Individual Mind Is Part of a Greater Consciousness and Why It Matters

“Eben Alexander proves to us once again that experience is the greatest source of knowledge. Relying on his own near death experience and those of others who have written to him, Eben takes us from the wisdom of the Greek philosophers through to modern medical researchers to give us an overview of that mysterious place known as the afterlife. . . . A courageous book that tackles the question of life after life with science, philosophy and the heart rending experiences of many who have gone to the other side.”

“In this important book, Eben Alexander describes how his own life-changing NDE was a personal example of what scientists, spiritual leaders and ordinary people throughout the world have been reporting, especially in the last two decades. This book makes it wonderfully clear how these mind-blowing experiences can have an enormous positive impact on the way we live our lives.”

“Moving beyond Proof of Heaven, Eben Alexander here draws upon his own coma experience in combination with related accounts from a wide variety of sources to advance an ecumenical vision, which I strongly support, of recovering humanity’s lost wisdom through creative synthesis of the best in contemporary science and religion.”

Sign up to stay in touch with Dr. Alexander

Learn more about news, events, and be the first to read the blog posts.

As a gift for signing up, you will receive an audio recording of an Eben Alexander lecture given at the 2017 IANDS national conference.