In order to meaningfully engage the soul, we must turn to our heart.

Living in a Mindful Universe

Every human body contains a heart that emits an electromagnetic field in the shape of a torus. It moves out the top of the head and back in through the base of the spine in continuous motion in both directions. The heart’s electrical field is sixty times greater than that of the brain, and its magnetic field is 5,000 times greater than that of the brain. 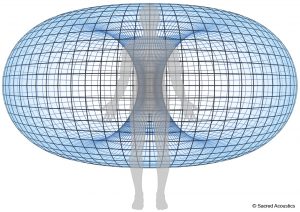 The heart generates the strongest electromagnetic field in the body, and its pumping action transmits rhythmic information patterns to the brain. The heart actually sends more information to the brain than the brain sends to the heart. It seems that the heart has a mind of its own.

Studies reveal this electromagnetic field, which extends several feet or more outside the body, seems to pick up information in the surrounding environment and also broadcasts one’s emotional state out from the body.

As you observe your breath during your daily practice, imagine your breath is moving in and out of the heart. Note in your journal if this exercise assists in lessening distracting thoughts or any other sensations.

Want to join the discussion?
Feel free to contribute!

This site uses Akismet to reduce spam. Learn how your comment data is processed.